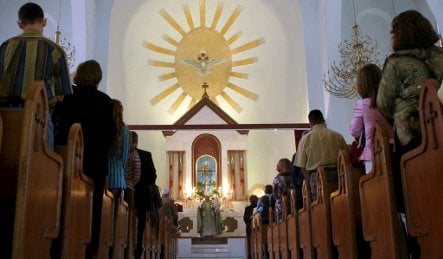 Asghar al-Moussawi, a deputy minister responsible for displaced people and refugees, said that Iraq needs all of its people to stay and help improve the country’s prospects.

“The fact that certain governments are encouraging the emigration of Iraq’s Christians is unacceptable,” Moussawi was quoted as saying by the Centre for National Media, a government organisation. “Our government is against this type of invitation as nothing justifies it, especially as the security situation in Iraq is stable. It is not reasonable that Iraqis leave their country,” he said, alluding to the need for people to stay.

Germany’s Interior Minister Wolfgang Schäuble in April 2008 appealed to European countries to offer refuge to Iraq’s Christians. The proposal was rejected by the European Union, which said asylum decisions could not be based on religious grounds.

“To encourage a group of any particular faith to leave the country is against international law, and causes more harm than benefit to those people,” Moussawi said.

According to Christian leaders, of the 800,000 Christians who lived in Iraq before the 2003 US-led invasion that ousted dictator Saddam Hussein, 250,000 left the country.

The German state of North Rhine-Westphalia will take on some 540 Iraqi refugees in the coming weeks, state integration minister Armin Laschet said in early February.