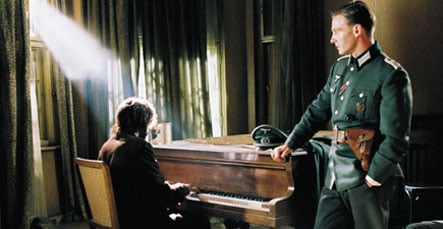 Wilm Hosenfeld has been recognised as Righteous Among the Nations – people acknowledged for aiding Jews during the Holocaust, Yad Vashem said in a statement.

Hosenfeld was made famous by Roman Polanski’s film “The Pianist” that was based on a true story of Jewish-Polish musician Wladyslaw Szpilman and that has won top prizes at the Cannes Film Festival, the Oscars and the French Cesars.

Szpilman had written to Yad Vashem, as well as in his diaries that became the basis for the movie, that “in November 1944 Hosenfeld helped him find a hiding place and that he provided blankets, food and moral support” while the musician hid in Warsaw. Another man, Leon Wurm, had also testified that Hosenfeld employed him after his escape from a concentration camp.

Yad Vashem had considered naming Hosenfeld Righteous Among Nations before, but decided not to do so “until it was clear that he was not involved in war crimes during the Warsaw Uprising.”

Monday’s decision came after new material emerged, including Hosenfeld’s personal diaries and letters to his wife “which clarify his consistent stance against the Nazi policy toward the Jews.”

“In his writing, Hosenfeld stressed his growing disgust with the regime’s oppression of Poles, the persecution of Polish clergy, abuse of the Jews and, with the beginning of the ‘Final Solution,’ his horror at the extermination of the Jewish people,” it said.

After the war Hosenfeld was arrested, tried by the Soviets and sentenced to life imprisonment, later commuted to 25 years. He died in a Soviet prison in 1952.

His children in Germany will receive the medal and certificate on their late father’s behalf.