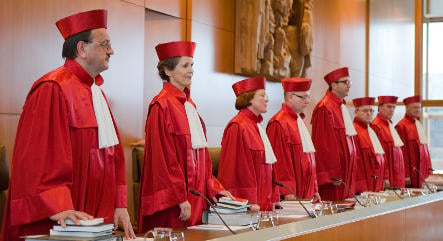 Kicking off the hearing, which will examine whether the treaty breaches Germany’s Constitution, Foreign Minister Frank-Walter Steinmeier dismissed the idea that it makes the European Union less democratic.

“Exactly the opposite is the case: the Treaty of Lisbon expressly strengthens the democratic fundamentals of the European Union,” Steinmeier said according to a text of his comments before the Germany’s Constitutional Court.

Although Germany’s parliament has approved the treaty and the president has signed it, the final step needed to complete the ratification process – handing over the documents in Rome – has been put on ice pending the hearing. The court’s ruling is expected in two or three months, meaning the fate of the EU treaty – which supporters insist is vital to improve EU decision-making – will continue to hang in the balance.

The Treaty provides for more power for the directly-elected European Parliament as well as for national parliaments, Steinmeier noted.

Interior Minister Wolfgang Schäuble also defended Lisbon, insisting it “does not harm the sovereignty of the Federal Republic of Germany.”

“In today’s interconnected world, many challenges can no longer be met at a purely national level but only in co-operation with other countries,” Schäuble said.

The court – Germany’s highest – was also to hear contributions from the plaintiffs, including conservative member of parliament Peter Gauweiler and a group of deputies from far-left political party The Left.

They argue the proposed treaty – designed to replace the now-defunct European Constitution – calls into question the principle of democracy, a cornerstone of Germany’s Constitution as it undermines the Bundestag, the country’s parliament.

In an earlier radio interview, Gauweiler argued that laws could be pushed through without the consent of the German people. “If the government fails to pass legislation in the Bundestag, it can then pass it through the European Commission where colleagues from other EU countries sit,” he told RBB-Inforadio.

His lawyer, Dietrich Murswiek said: “The purpose of the complaint is the defence of democracy.”

But Steinmeier insisted: “National parliaments would in the future be completely involved in the European law-making process.”

Moreover, by creating a new European “foreign minister,” the Treaty would boost the bloc’s presence on the world stage, Steinmeier argued.

“This has clearly been shown to be necessary in recent weeks – during the gas conflict between Russia and Ukraine as well as the war in the Middle East,” he added.

Any further delay to ratification in Germany would come as a major blow to Chancellor Angela Merkel who campaigned vigorously for the treaty. However, the hearing in Germany is not the only hurdle the treaty needs to clear before it can come into force.

The document must be ratified by all 27 EU countries and remains bogged down in Ireland, the Czech Republic and Poland.

The main stumbling block to the Treaty’s ratification remains Irish voters, who voted 53-47 against the document in a referendum last June. They will vote again – probably later this year.