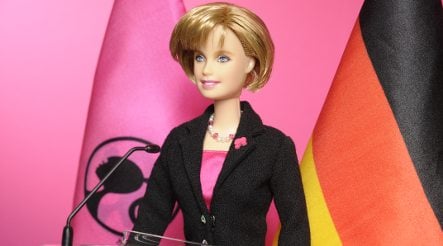 It’s hard to imagine Germany’s no-nonsense chancellor having perhaps played with a Malibu Barbie and her lifestyle accessories as a child – or at least the East German versions of them. But for today’s little girls into girlie things, Angela Merkel – in svelte doll form at least – is ready for her plastic townhouse and pink convertible.

The makers of the Angela Merkel Barbie doll, however, might rather have kids pose her behind a play lectern, or set her down at a table with a bunch of Ken dolls, for a pretend cabinet meeting, not a tea party.

“For 50 years, Barbie has inspired girls to believe they can be anything, and Chancellor Merkel certainly brings that message to life for girls worldwide,” said Richard Dickson, general manager and senior vice president of Barbie.

The unveiling of Merkel as Barbie came Thursday at the 60th International Toy Fair now being held in Nuremberg, and kicked off a year of celebrations of Barbie’s 50th birthday – even though she doesn’t look a day over 21.

Barbie Merkel has also withstood the ravages of time. Gone are the worry lines that come with dealing with crises on the world stage, and the doll’s waistline has more in common with models in Vogue than with the real measurements of the 54-year-old pastor’s daughter and former physicist from East Germany.

Barbie Angela’s makers have given her Chancellor Merkel’s trademark bob and wispy bangs, as well as a black pant suit with a jacket, complete with “buttons” made out of Swarovski crystals. In keeping with Merkel’s conservative fashion sense, the doll wears a pearl necklace and low-heel pumps.

The Angela Merkel doll was a highlight among the 70,000 new toys presented at the toy fair. Many of the exhibits were promoted as being environmentally friendly – the theme of this year’s event.

One Swiss company unveiled a doll’s house made of cardboard, outfitted with a trash recycling center and windmill and solar panels to provide energy. Perhaps Barbie Angela can move into this abode and forego the traditional plastic Barbie townhouse, which is definitely not biodegradable.