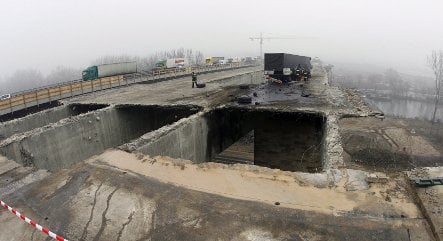 The truck fortunately came to rest on bridge after the front axle broke – keeping it from plunging 16 metres below. The driver was unharmed after his spectacular stunt, but emergency services had to use a crane to get him off the platform.

“We don’t know how he made it over there,” a police spokesman said.

The driver of the 40-tonne vehicle somehow failed to follow a detour onto a temporary bridge over the river, but sheer luck and plenty of momentum kept him from landing in one of the several gaps in the surface of the old bridge.