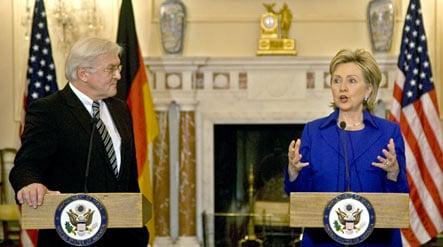 German Foreign Minister Frank-Walter Steinmeier said he saw a chance to reinvigorate transatlantic ties with the new US administration after meeting with Secretary of State Hillary Clinton in Washington. She, in turn, said America expected to rely one of its key European partners.

“As President (Barack) Obama has made quite clear, we need our closest allies, like Germany, to help us ensure the success and stability of the Afghan nation at this very important moment,” said Clinton.

Obama has singled out Afghanistan as his main front in the war on terrorism and plans to deploy 30,000 more US troops there over the next 18 months.

Germany last year agreed to increase the number of troops it has in Afghanistan to 4,500, where they form part of NATO’s 50,000-strong International Security Assistance Force (ISAF). But Berlin has been reluctant to send them in the more violent southern part of the country.

Steinmeier told German public broadcaster ZDF he and Clinton had discussed a number of important issues in an extremely constructive atmosphere.

He also called Iran’s launch of its first domestically made satellite into orbit was “a worrying development” showing “once again the technical achievements that Iran is obviously capable of and the threats.”

Iran said on Tuesday it had launched its first homegrown satellite into orbit, raising fresh concerns among world powers already at odds with Tehran over its nuclear ambitions.

But back in Berlin, Chancellor Angela Merkel warned on Tuesday against US protectionism over a ‘Buy American’ clause in a US stimulus plan before Congress.

“We must avoid protectionism,” Merkel told reporters, saying she had discussed the point in a telephone conversation with US President Barack Obama last week.

“Protectionism is the wrong answer” to the global economic crisis, she added when asked about a clause in an $888-billion stimulus bill before the Senate requiring new infrastructure projects to use US-manufactured goods.

The House of Representatives last week approved an $819-billion version of the bill with a more narrow Buy American restriction to US iron and steel.

The European Union sounded the alarm over the plan Monday. EU ambassador to Washington John Bruton told AFP he had written to congressional leaders and the Obama administration expressing concerns about legislation to restrict procurement to US goods, including steel and textiles.

The issue is particularly sensitive in Germany as the world’s top exporter and home to some of the giants of the steel industry.