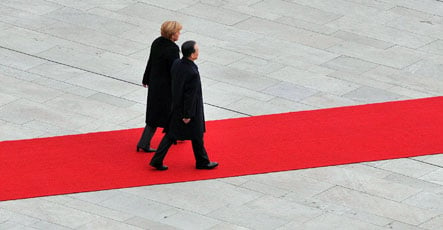 Merkel and Wen in front of the Chancellery. Photo: DPA

“We can overcome the crisis together,” Wen told a joint press conference in Berlin, one of several stops for the Chinese leader in Europe this week.

Merkel warned the two nations’ trading partners against turning to protectionist policies during the worldwide economic downturn. “Our opportunity lies in open markets,” she said.

Germany, the world’s biggest exporter, enjoys lucrative trade relations with China, the second largest exporter of goods. Wen put the volume of bilateral trade in 2008 at $115 billion and said he hoped that level of trade could be maintained this year.

The two leaders also presided over a deal that will see one of China’s largest firms spend €100 million ($131 million) for what is being billed as the biggest factory ever built by a Chinese company in Europe.

Germany’s ThyssenKrupp signed a deal to share with China part of the technology required to run the Transrapid magnetic-levitation train, which

Wen was on his first European trip since Beijing put off a planned summit with the EU in December in protest at French President Nicolas Sarkozy’s decision to meet the Dalai Lama, Tibet’s exiled spiritual leader. France held the rotating EU presidency at the time.

Relations between Germany and China soured in 2007 after Merkel met the Dalai Lama, whom China regards as a dangerous separatist, prompting Beijing to suspend bilateral talks on legal reforms in China that only recently resumed.

Merkel renewed her call for China to hold talks with the Dalai Lama and offered Germany’s help if the country could make a “constructive contribution” to resuming dialogue.

China’s support of German unification after the Berlin Wall fell 20 years ago.

About 50 demonstrators gathered outside the chancellery in central Berlin waving “Free Tibet” banners, with another 30 people demonstrating on behalf of the banned Chinese spiritual group Falun Gong.