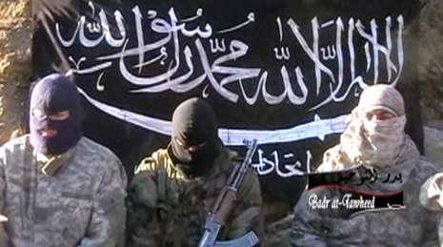 Photo: Screenshot of the video from German broadcaster ARD.

Federal authorities analysed a video posted on Tuesday by Uzbekistan-based terrorist group the Islamic Jihad Union (IJU), and found that it included a German-speaker, the ministry said.

According to German broadcaster ARD, the extremist video threatens to attack Germany in retaliation to its participation in NATO operations in Afghanistan.

“This year we have prepared a special surprise package for the occupying forces,” one of six masked men in the al Qaeda-linked group said in German during the recording. “An ally of the occupying power should count on an attack.”

German Chancellor Angela Merkel’s name was also used in the video, the broadcaster said, adding that it was probably recorded during the recent Gaza conflict, because the video also shows children killed and injured during the fighting. One of the men asks where the chancellor was during the fighting between Israel and Palestinian Islamist group Hamas.

Another terrorist video threat turned up online over the weekend, but there were doubts about its authenticity and authorities determined it posed no threat to Germany.

The IJU has been on the US list of terrorist organisations since 2005.