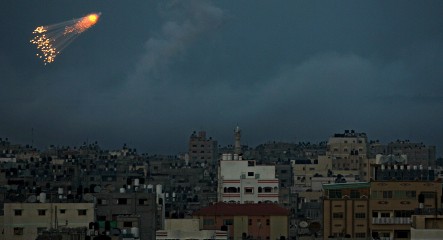 “The Israeli side has itself announced that it will carry out an inquiry into these allegations. We expect this to occur with the necessary urgency and thoroughness,” foreign ministry spokesman Andreas Peschke said.

But on the idea for an international, independent probe he added: “It has to be asked what concrete added value such a step would bring.”

“In the current situation we should be focused on turning the very fragile peace there into a sustainable ceasefire … so that it is possible to give concrete help to people, to organise reconstruction and of course to return to a political process,” he told a news conference.

Under international law, white phosphorus is banned for use near civilians because it can cause severe burns, but is permitted for creating a smokescreen.

Rights group Amnesty International alleged on Monday that Israel could be guilty of war crimes, saying the use of the shells in a civilian areas was “clear and undeniable.”

Israel has insisted that all weapons used in its Gaza war were within the bounds of international law.

Germany also welcomed signals from new US President Barack Obama that his administration aims to make the Middle East a top foreign policy priority. “The government believes that progress in the Middle East is only possible with a strong and sustainable contribution of the United States,” another government spokesman Ulrich Wilhelm said.

Foreign Minister Frank-Walter Steinmeier discussed the Middle East on Thursday in a phone call with his new US counterpart Hillary Clinton in which she made clear it was “right at the top” of her list, Peschke said.

Chancellor Angela Merkel on Friday held a “extensive” phone call with Lebanese Prime Minister Fuad Siniora in which they agreed that “the time has come to give new impetus to the peace process,” Berlin said.