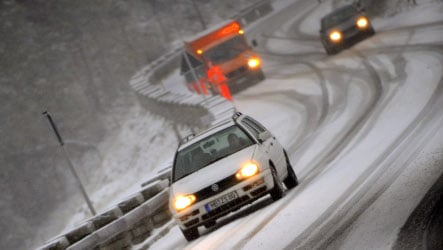 The states of North Rhine-Westphalia, Rhineland-Palatinate, Saxony-Anhalt, Baden-Württemberg, Saxony, and Mecklenburg-Western Pomerania saw the most accidents.

In Rheinfelden in the state of Baden-Württemberg, a 64-year-old man on a motor scooter died after wrecking on a steep and icy street. In Schwörstadt a 37-year-old Swiss man sustained serious injuries when he skidded into a steel guardrail, which broke and bored through his windshield.

Meanwhile two young drivers in Griesingen in Baden-Württemberg hit head on at high speed, leaving an 18-year-old and her 20-year-old friend with life-threatening injuries. More than 20 other people were seriously injured after more than 250 accidents on the state’s slippery streets.

An Altenkirchen mother and her 10-year-old daughter died in the state of Rhineland-Palatinate when a 22-year-old driver lost control of his vehicle while passing the pair. Their car crashed into several trees and the child was thrown through the windshield and died later in the hospital, police said. Her mother died on the scene and the other driver and his female passenger were seriously injured. Police said they responded more than 100 other accidents in the area.

Several other tree collisions were reported across the country, including Mecklenburg-Western Pomerania where two people died after hitting trees.

A 78-year-old driver died in the state of Saxony after he collided with a large truck near Böhlen.

Another driver died in on the A9 motorway in the state of Saxony-Anhalt also hit truck, critically injuring his passenger.

In Hamburg fire department workers had to free an injured woman from from her car after an accident. Police responded to at least 100 ice-related accidents in the states of Hamburg and North Rhine-Westphalia, though most were without injury.

A 24-year-old Bavarian man had to swim to safety after an icy street landed him in the nearby Vils river, police said, adding he’d been driving too fast.

In Hesse some 17 people were injured while driving in similar conditions.