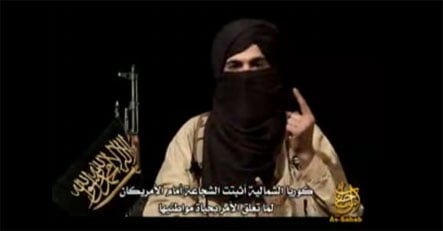 Photo: A screenshot of the video.

The man calling himself Abu Talha Al-Alamani, which means Abu Talha the German, spoke mostly German in the 30-minute video, saying that German soldiers were not safe anywhere.

“Should the Germans believe that they will get away with this, then German politicians are in the wrong place,” he said.

Germany is in our sights for as long as they have soldiers stationed in Afghanistan, he said.

Although the video was dated October 2008, it was released on Saturday evening, hours after a suicide car bomb outside the German Embassy in Kabul killed five people and injured more than 30 others, including some members of embassy staff.

Abu Talha said, “Letting me blow myself up in the name of Allah has been my wish since 1993. Time is running out for the Germans. I say to the German people, arise and become just again’.”

German Chancellor Angela Merkel condemned the suicide bombing, calling it an inhumane act, while Foreign Minister Frank-Walter Steinmeier said it was an act of barbarism, adding, “We will not allow terror and horror stop us from continuing our aid for the Afghan people.”