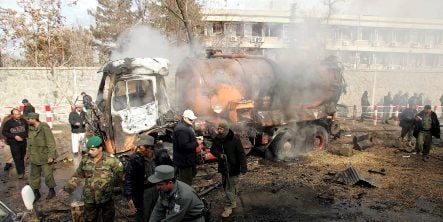 Aftermath in front of the embassy Photo: DPA

The initial blast, which caught a water tanker and several cars, injured at least 23 further people, according to the Afghan defence ministry.

A spokesman for the German Foreign Ministry told the Frankfurter Allgemeine Zeitung that several embassy staff had been hurt but none seriously.

An aid worker who has asked not to be identified, was nearly at the German Embassy when the bomb went off, spoke exclusively to The Local from Kabul.

He said: “I was on the way to the German Embassy to extend my visa this morning when the explosion happened.

“I was in a car with my driver, and we were nearly there. There is a supermarket there too, so many foreigners are often there. There are checks as you enter that district, not exactly checkpoints, but police stop cars from time to time. We didn’t get stopped I guess because it is obvious I am a foreigner.

“We were about 300 metres away, when we saw and heard and felt a massive explosion. I had my window about halfway open and I could feel the wind come in from the explosion.

“I got my driver to stop the car and I walked towards the area where it happened. I got to within about 100 metres.

“I could see what looked like a water truck on fire. There was lots and lots of military around and many policemen.

“The police put a cordon around the area but I went up to try to take a closer look. There was a local woman screaming and crying. We heard that a child had been killed, I guess it had been her child or son who was killed.

“I could see a minibus on fire, which I suppose was the vehicle with the bomb in it. There was also a white pick-up truck and two green pick-ups, the kind which are usually used by the police. One had caught fire, or had some burning debris in the back of it.

“It was all really fast and hectic and I was soon pushed away by the military and police who were at the scene.

“I have been in Afghanistan for a month and a half – I was in Herat until recently, and there have been two big explosions there during the last week. It was very strange to be so close to something like this, and to have been on the way to being closer. If we had set off five minutes earlier than we had, I would have been caught up in the explosion.”

The Taliban has claimed responsibility for the attack, holding a press conference to do so, and telling journalists it was aimed at the German Embassy’s fleet of vehicles.

The US base Camp Eggers is at the other end of the road, and five soldiers were injured by the attack. The area has been attacked before as it is home to several embassies and offices of international organisations.