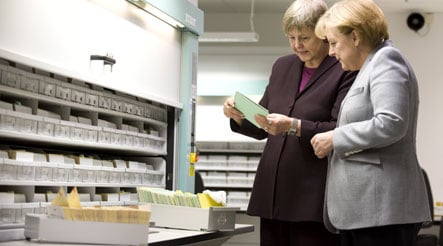 “Opening the files has led to reconciliation not division,” Merkel said on her first ever visit to the archive in eastern Berlin.

The chancellor, raised herself in the formerly communist eastern part of Germany, said many people were still seeking information from the archive. Even when the files contained “very bitter insights” for some, for most Germans “knowing was better than not knowing or not being allowed to know,” she said.

Merkel called the archive’s work unparalleled in Europe for uncovering the secret police’s activities under communism. Some 80,000 requests to access the files were made in 2008 alone.

This autumn marks the 20th anniversary of the fall of the Berlin Wall, but it took a few months for angry East Germans to storm the headquarters of the dreaded Stasi on January 15, 1990. Widely feared in East Germany, the Stasi became notorious for their thorough penetration of most aspects of society.