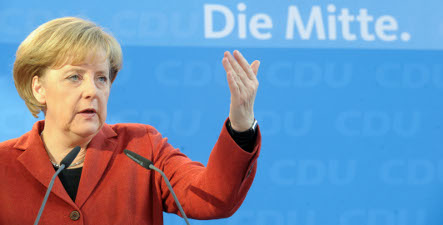 Merkel will chair a meeting on Monday at 1600 GMT between her conservative Christian Democrats (CDU) and their centre-left coalition partner the Social Democrats (SPD) to thrash out an accord on a €50 billion ($70 billion) rescue plan for Europe’s economic powerhouse.

The package will include new investment in schools and infrastructure, simpler rules on creating temporary jobs and a €100-billion fund to guarantee loans for struggling firms is also on the cards, she has said.

While there is broad agreement on the size of the package, the parties remain divided on some of the fine print, with neither side wanting to seem ungenerous ahead of general elections in September and several state polls.

As the talks get underway, the main source of discord remains tax policy. The SPD wants to reduce the basic tax rate to 12 percent from 15 percent but the conservatives have sharply rejected this.

Economy Minister Michael Glos, from the CDU’s Bavarian sister party the CSU, slammed the proposal as “not sensible,” with another senior CDU official saying it stood “no chance” of being adopted.

On the other hand, the SPD is keen to raise the tax for top earners, a notion rebuffed by Merkel who says it would send the wrong signal at this time of crisis.

With at least half an eye on the opinion polls ahead of a national election on September 27, both parties have dropped initial opposition to tax breaks – a position they had maintained was key to maintaining a balanced budget. But as the parties play party politics ahead of the polls, the economic situation Europe’s largest economy becomes ever more dire.

Unemployment is on the rise for the first time in 33 months with more than three million out of work while Berlin fears the economy could shrink by three percent this year – the sharpest dip for 60 years.

This is turning up the heat on politicians to stop their political jostling for position and instead to come up with an ambitious package of measures to halt the economic slide.

In an interview with the Hamburger Abendblatt daily, CDU secretary-general Karl-Theodor zu Guttenberg called on the “grand coalition” to clinch a “powerful and vast” package, and avoid getting tied up in “nebulous political considerations.”

Christian Wulff, the CDU premier of Lower Saxony in northwest Germany, has charged that there had been “too much bustle and not enough leadership” in dealing with the crisis.

Calls for action are not just coming from the political class in Berlin but from businesses and the media.

“We should not keep moaning about the situation but discuss the problems openly with the banks,” president of the BDI business association, Hans-Peter Keitel, said in an interview with Der Spiegel on Monday.

An editorial in the influential Süddeutsche Zeiting complained the two coalition parties are “getting lost in party politics. “What will emerge from this is an economic package that offers something to everyone because each party wants to serve its own clients,” the newspaper said.