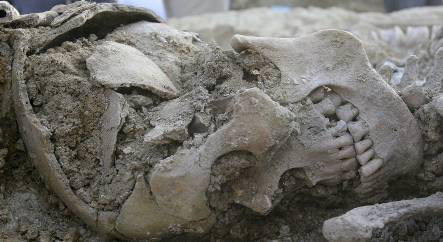 “They are the remains of women, men and children,” public prosecuter Waldemar Zduniak told the paper. “A portion of the corpses display bullet wounds.”

The first skeletons were uncovered in October in Malbork, which before World War II was part of Germany and known as Marienburg. But officials didn’t have an official body count until Tuesday.

“It could be that the German civilians were killed during fighting in 1945 between Germans and Russian troops,” Bernard Jesionowski of the Marienburg musuem told Polish news agency PAP.

German military leaders ordered civilians to leave the city at the end of 1944, but several thousand remained and their fates remain unknown, Jesionowski told the paper.