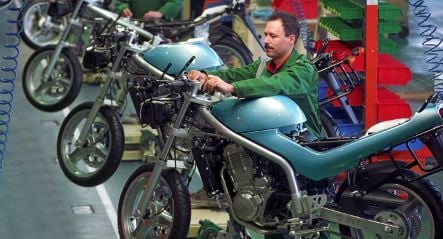 After several rounds of downsizing, only 40 employees remained at the company’s headquarters in Zschopau in the formerly communist East German state of Saxony.

According to the paper, Malaysian owner Hong Leong – which bought the company in 1996 – notified employees in mid-2008 that they were looking for a buyer and would be closing the factory near the end of the year due to heavy losses. Though the last motorcycle was finished in September, the replacement parts division of the company will stay open. A Hong Leong representative told the paper that several companies were interested in buying the company, which has a price tag of €5 million.

MZ, short for Motorradwerk Zschopau, was one of the world’s oldest motorcycle manufacturers, and is famous for creating the first two-stroke motorcycle engine. The factory employed some 4,000 workers during the communist era, producing about 100,000 motorcycles each year, the paper reported.