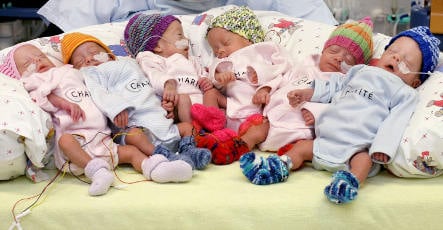 A file photo of the sextuplets on December 4. Photo: DPA

All but one of four girls and two boys, Rana, Adem, Esma, Zeynep, Zehra and Ahmed, were pronounced healthy enough to leave Berlin’s Charité hospital on Monday morning. One of the babies remained in the hospital because it was ill.

All six preemies, born after 27 weeks on October 16, are being bottle fed without complications. Meanwhile parents Roksana and Hikmet have moved into a larger apartment with their four-year-old daughter. The sextuplets will still be looked after in their home. The family has received support from charities for the cost of caring for their new brood.

The birth of sextuplets remains rare in the age of fertility treatments, and the Berlin baby six-pack is the first in Germany since 1986.