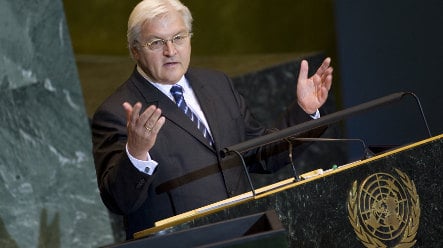 “I don’t rule out that international observers under the umbrella of the UN should flank an operation – if all sides agree to it and promise to end the violence first,” Steinmeier told the Sunday newspaper Frankfurter Allgemeine Sonntagszeitung.

But he emphasised that the priority was to establish an immediate ceasefire. “I am calling for a humanitarian ceasefire that will enable the emergency treatment of the population.” This will also make breathing space for diplomacy to work towards re-opening the checkpoints into Gaza, Steinmeier said.

“Every day of violence on the Gaza strip not only makes more tragic victims, but also makes it more difficult to maintain the prospects of peace in the Middle East,” he told the newspaper, adding that the best way to counter Palestinian extremism was to find an agreement between Israel and the Palestinian President Mahmud Abbas.

“The biggest threat to Hamas is not air strikes, but a lasting improvement in living conditions on the West Bank, as an attractive alternative to the Hamas regime in Gaza,” he said.

Steinmeier also emphasised the vital role of the other Arab states in the Middle East crisis: “This violence undermines all constructive efforts being made on the Arab side, which we desperately need for a peaceful solution.” He appealed to all Islamic states to use their influence to end the rocket attacks on Israeli territory.