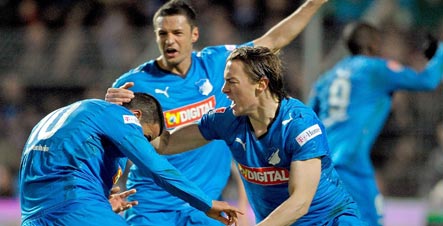 But all that changed when a rich businessman called Dietmar Hopp remembered the football club he had played for as a boy and began work on his dream of seeing Hoffenheim slay the giants. Earlier this month the fairytale almost came true when only a late goal from Bayern’s Luca Toni denied Hoffenheim a point from Munich’s Allianz Arena.

The club has been the rags to riches story of German football in 2008. But in truth, the story began nearly 20 years ago when Hopp started investing his multi-million wealth. But 2008 was when the village team from southwest Germany not only won promotion to the Bundesliga for the first time, but finished the year top of the league.

When software entrepeneur Hopp – who helped found SAP – became Hoffenheim’s financial backer in the early 1990s, the village, with a population of 3,000, was overshadowed by their neighbours Karlsruhe and Stuttgart. But slowly things changed and former Schalke 04 coach Ralf Rangnick joined the club in 2005 while they were in the regional league – Germany’s third tier.

Two promotions in the last two seasons put Hoffenheim in the top flight and after winning their first two games, they claimed their first big scalp when they hammered Hamburg 3-0 in October.

Players like the league’s top scorer, Bosnia striker Vedad Ibisevic, offer clues at how Hoffenheim’s success has come about. Bought from Alemannia Aachen for the bargain price of just €1 million in July 2007 Ibisevic had scored had just 11 goals in two seasons. But this term he has scored 18 goals in 17 games with the season only halfway through.

“If someone had said to me at the start of the season I would have scored 18 goals by the halfway point, I would have walked away laughing,” says the 24-year-old.

Likewise defender Marvin Compper and midfielder Tobias Weis were just eager fans in June when Germany lost the Euro 2008 final, but on the back of impressive performances, they both found themselves in the national squad which lost to England in November.

“My goal for this season was just to help Hoffenheim stay in the Bundesliga, I wasn’t even thinking of the national team,” said Compper. “I got pulled aside by Ralf before a training session in November and told I was in the Germany squad, it was very hard to concentrate with that thought in your head.”

Hopp has invested wisely and astutely. Talented players have been bought and nurtured, but all have something to prove.

“Hard work, lots and lots of hard work,” is the reason Rangnick gives for Hoffenheim’s success.

The strong team ethic was reflected the day after his side lost 2-1 in Munich. He gave his side the following day off, but to a man they side opted for extra training.

“If you see the development in the last two and a half years it is absolutely outstanding,” said Rangnick “We started out in the third division and won two promotions, right now we

are top of the Bundesliga, so for the whole area, not only the team, it is a fairytale.”

Their draw at Schalke 04 in the last league match of the year means they end the year as Bundesliga leaders, but the coach is all too aware of the challenges they face.

“Getting to the top of the table has been the easy part, to some extent, because we were the surprise package,” said Rangnick. “Staying there will be much more difficult.”