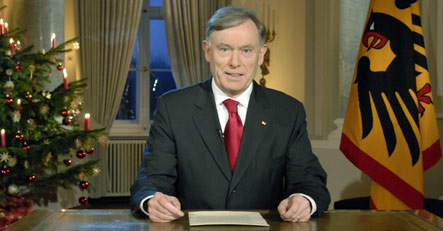 “An unimaginable amount of money was wasted. Many people fear for their savings and their jobs … but I am confident we will rise to the challenge,” Köhler said in his speech to be broadcast Christmas Day

Köhler was full of praise for the way Germany’s government had addressed the financial crisis, slightly contrary to the analysis of opposition parties and some foreign leaders, notably Britain’s Prime Minister Gordon Brown.

“Our nation, our citizens, and our politicians have reacted cleverly and soberly,” he said. This was due partly to a strong economic foundation. “The reforms of the last few years, and a new willingness to cooperate among our businesses have strengthened us for the tasks that face us.”

Köhler even had a vision of a brighter economic future that would dawn from the present crisis. “It is a chance to create better cooperation among the people of the world. A chance to organise the global economy and finance better, so that capital serves rather than dominates people.” To achieve this, the former head of the International Monetary Fund said that those with power and accountability needed to win back the trust of the people.

“We need integrity, modesty and moderation. Credibility will bring back trust. It is the bond that holds our society together,” Köhler said, before ending by appealing to the nation’s sense of community: “It really is down to us. Let us make strength from our possibilities.”