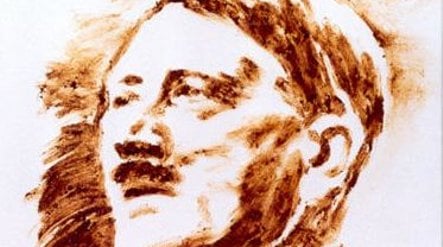 Martin von Ostrowski’s art isn’t for everyone. But his new exhibition at the Gay Museum in Berlin certainly is attracting attention from the German media. Cologne-based tabloid Express on Tuesday labelled his work “crass art” and “bizarre.” Why? Instead of using conventional types of paints, the 50-year-old uses his body fluids to create.

“I exist as I do digest, as I do produce semen,” Ostrowski said in a statement on his website, adding that painting with sperm and poo shows that he is part of the organic world.

Ostrowski got the idea to use semen as paint during a series of oil paintings which pictured ejaculations back in 1988. The artist wanted the picture to be more authentic and oils apparently just didn’t do it justice. Feeling inspired, he just masturbated on the darkened canvas.

However, using semen as pigment for paintings is a tough choice since Ostrowski has had to “create” all the materials for more than 30 paintings since 2003. “Calculating approximately 40 ejaculations for one portrait, he has processed some 1,000 orgasms,” the museum said on its website touting the exhibition that opened December 18.

The semen gets frozen and defrosted when required for painting. But there is another dimension to using body fluids as paint. “The sense of smell lets the defrosted painting-material act as an archaic trigger for immediate sexual action,” according to the museum statement.

While von Ostrowski claims the semen paintings exude a positive message, he gained fame with his less positive poo portraits of historical figures having what he considers had a disastrous effect on German and world’s history. Besides Nazi dictator Adolf Hitler, his poop oeuvre includes likenesses of Friedrich the Great, Otto von Bismarck, and Kaiser Wilhelm II.

The exhibition at the Gay Museum in Berlin will run through March 16.