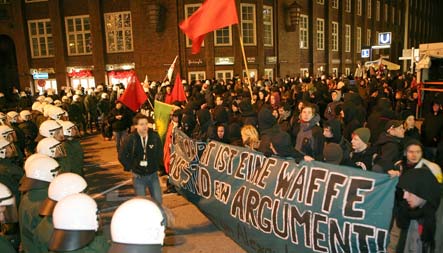 The demonstrators gathered at the university, and intended to march to Hamburg’s central railway station. Police broke up the protest when bottles, metal rods and fireworks began being thrown.

The police redirected the route of the march, and some of the demonstrators then broke into groups and began attacking policemen around the city centre. The violence continued late into the evening in the Schanzenviertel district. By Saturday night four police officers had been injured and ten people arrested.

A separate protest involving 250 people held outside the Greek consulate went peacefully. But the police had a heavy contingent plus water cannons on hand.

According to the organisers, the demonstration in the city centre was meant to draw attention to increasing state brutality towards its citizens. As the latest examples, they pointed to the 15-year-old demonstrator recently shot by police in Athens, the spark of the current violence there, and the case of Sierra-Leonean Laya Alama Condé, who died in police custody in Bremen after being forced to take an emetic.

The riots in Athens continued unabated Saturday night, with police using to tear gas to drive away around 150 protesters who attacked banks and government buildings.