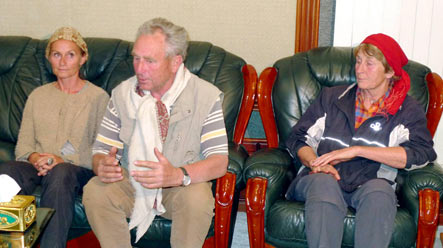 Architect Julia Thielebein, who has worked in Yemen for the past 10 years, and her parents “have changed their travel plans at the last minute. They were still in Sanaa during the day,” said the source requesting anonymity.

He declined to comment on the reasons behind the change of plan. An embassy official had earlier said the trio had left aboard an early-morning flight to Germany. Thielebein is expected to spend the end of year holidays in Germany before returning to Yemen, where she works with the German economic development agency GTZ, a Western diplomat said earlier.

The three were released on Friday morning after mediation by a tribal dignitary from the mountainous Bani Dhabyan region east of the capital, where they were seized on Sunday while on an excursion.

German Foreign Minister Frank-Walter Steinmeier welcomed their release and said late on Friday that they were at the German embassy in Sanaa. “I am very relieved that the three German nationals who were abducted in Yemen are free again,” he said in a statement.

“They are doing well under the circumstances. I thank all those who contributed to their release,” including Yemeni and German authorities.

Yemen’s interior minister, Motahar Rashad al-Masri, said on Friday night that “the freeing of the hostages was secured without conditions, as security forces were preparing to launch an operation to liberate them.”

The minister, quoted by the official Saba news agency, said the government had left it to the tribal dignitaries to mediate a peaceful release. Initial reports were that the kidnapper was demanding $200,000 (€144,000) to compensate him for lost land and that police release his brother and son, who were arrested four months ago over a land dispute.

Unconfirmed reports on a Yemeni Internet site, Marebnews, said the mediator had promised a ransom of $100,000 dollars and an assurance that the kidnapper would not face prosecution. He was also reportedly promised that the case of the two prisoners would be reviewed.

On Thursday, a tribal source said the tribesmen holding the family hostage were also demanding the release of two Yemenis detained in the United States for supporting Al-Qaeda.