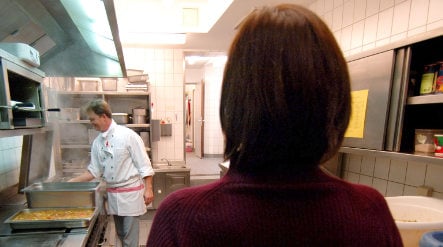 Caspar only allows herself to be photographed from behind. Photo: DPA

Picking Juliane Caspar, a 38-year-old German, is a “sensation” in light of the French view of German food, according to Die Welt on Wednesday.

Caspar was previously in charge of the Michelin guides for Germany, Switzerland and Austria and will take over for Jean-François Mesplède, who is moving to Michelin’s French food magazine “Etoile.”

“In consideration of the fact that German cuisine is regarded as a lethal weapon in most parts of France, this personnel decision is a sensation,” the paper reported. “It would be in the same dimension as if tomorrow Mercedes calmly announced the new boss of the development division was from Mars.”

But Caspar, who only allows herself to be photographed from behind due to her role as a restaurant reviewer, is qualified for the prestigious job with a “fast-paced” career behind her already, the paper reported.

She has worked for top restaurants in Germany, England, South Africa and Italy before taking on the Michelin Guide for the German speaking countries.

She is currently travelling and won’t give interviews, the paper reports, but one two-star chef who knows her, Christian Lohse of Fischer’s Fritz in Berlin’s Regent Hotel, attested to her culinary “authority,” calling her reviews “neutral” and “incorruptible.”