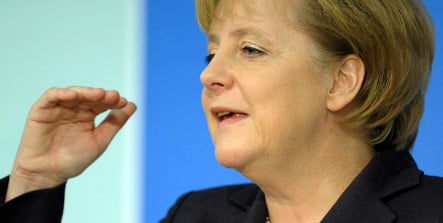 “We will take action again in January – another few billion could come together,” she told a conference of business leaders in the western city of Mannheim.

But she warned that state aid alone could only “help in a limited way” to end the recession and ruled out a voucher plan for consumers which has been the subject of speculation in the German press. Merkel said the fresh investment could go toward infrastructure improvements including roads, broadband communications networks and renovation of schools, as well as subsidies for temporary jobs.

The government is to decide in January whether to proceed with a new stimulus package to follow the €31 billion ($40 billion) already earmarked to fight the financial crisis and economic downturn.

The chancellor has recently come under fire for what critics describe as a timid approach to kick-starting the economy.

Quoting government sources, press reports have said Berlin is preparing to invest €20 billion to €30 billion in a fresh economic stimulus plan that will include public investment and consumer incentives.

A report in the daily Frankfurter Allgemeine Zeitung said on Tuesday that the government fears the German economy could experience the worst recession in post-war history next year.

The possibility that gross domestic product could fall by 3.0 percent or more in 2009 “is not unrealistic,” the paper quoted an internal Economy Ministry document as saying.

At present, the government still officially forecasts 2009 economic growth of 0.2 percent, but will probably revise that figure lower when its next forecast is issued in late January. Some economists have estimated that activity could contract by as much as 4.0 percent next year.

In the Financial Times Deutschland’s Tuesday edition meanwhile, the head of the respected DIW economic forecast institute called for a “forecast pause.”

“The crisis is so specific that we cannot grasp it,” Klaus Zimmerman said. “The situation is serious, but we cannot say to what extent.” He said he feared “self-fulfilling prophesies” which arise from a raft of pessimistic forecasts.

On Monday, Chanceller Angela Merkel’s spokesman Ulrich Wilhelm also said that “all economic estimations should be very prudent.” Forecasts are generally based on past crises, but “the current situation has few similarities with experiences in the past,” Wilhelm added.