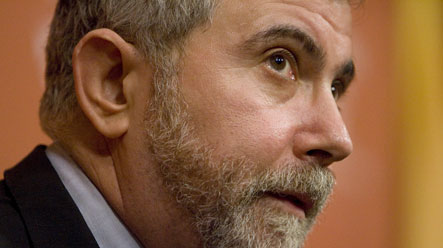 “They are still thinking in the category of a world as it looked one or two years ago, with inflation and deficits as the biggest danger,” he told Der Spiegel.

“The result – they have misinterpreted the seriousness of the economic crisis and are wasting valuable time – for Germany and for Europe. Maybe they lack intellectual flexibility.”

His comments come ahead of a meeting on Sunday at the Chancellery to discuss the economic crisis, which will bring Angela Merkel and several ministers together with a range of business managers, economists and trades union representatives.

A government spokesman said the meeting was going to be a one-off, and would aim to reach what he called a ‘minimum consensus’ of what measures might be possible, and what should be ruled out in deciding what to do.

Princeton economics professor Krugman said German politicians had to think of the bigger picture and stop worrying about whether they have to pay for the mistakes of others.

“That is understandable,” he said. “But it is small-minded seeing as the European as well as the German economy is in great danger.”

He urged the German government to concentrate as far as possible on public investments to boost the economy. Time was of the essence, and more important than getting everything perfect he added, “The perfect is the enemy of the good. We are in a drastic decline and have to act as fast as possible. Lasting stimuli will be decisive, no matter in which constellation they come.”

Should the German government fail to act, he predicted, “a very, very serious collapse with the worse jobless rates since the 1930s and in addition, possibly a lost decade like that of the Japanese.”

His comments come as the federal employment agency warned of increasing unemployment, with figures approaching the four million mark.

Frank-Jürgen Weise, head of the agency said the latter part of next year would be a bad time for job numbers. “From the second half of next year, according to the current situation, 3.6 million is possible. In a particularly bad month, the number of four million jobless could come into sight,” he told Focus magazine.

Focus magazine also reports this weekend that the HSH Nordbank has racked up losses of at least a billion euros this year, mostly due to the collapse of markets in the last couple of months.

Until September, the bank was only €360 million in the red, the magazine reports, but huge write-offs in October and November have crippled the company.

It will be completely restructured, cutting down to a basic bank with a balance of less than €150 million, the paper reports. A week or so ago, the bank secured up to €30 billion of government liquidity guarantees from the special finance stability fund.

Auto giant BMW announced this weekend it would be providing financial help for its network of dealers around the country, who have been badly-hit by a collapse in sales. The programme will cost at least €100 million, the Wirtschaftswoche weekly paper reported. November sales were down by more than a quarter, prompting BMW to send its workers on an extended Christmas break.

Further gloomy news came from car parts and technology firm Bosch, which confirmed this weekend it was to cut at least 2,000 jobs and reduce working times, after income was down by a fifth in October and November, with worse numbers expected to come.