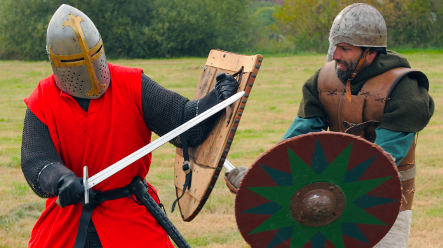 A file photo of a hobby knights rumbling. Photo: DPA

“Anthropological and DNA testing has enabled us to back up the theory that these are the remains of the grand masters. We can be 96 percent certain,” Bogumil Wisniewski, head of a team which found the skeletons, told AFP on Thursday.

The three skeletons were discovered in May 2007 in a crypt under the cathedral in Kwidzyn in northern Poland – formerly known by the German name Marienwerder – along with pieces of silk and ornate brooches, which were a sign of high religious rank.

Studies of the wood of the coffins confirmed that they were from the right period.

The Teutonic Knights’ order was founded in the Holy Land in 1190, during the Third Crusade. Despite its name, its members came from a handful of European regions, and not only German-speaking areas.

In 1226 the Polish Duke Konrad of Mazovia invited the knights to help him conquer the pagan population of neighbouring Prussia.

The order gradually took control of large stretches of the Baltic coast, establishing a state with its capital at Marienburg – today’s Malbork in northern Poland.

The knights fought a string of successful military campaigns against their neighbours.

But their power declined after they were defeated by an army of Poles and Lithuanians in 1410 at the Battle of Grunwald, which is still seen as a key moment in the history of both peoples.

The order lost its religious character in the 16th century, and its domain was transformed into the Duchy of Prussia, which endured in various guises until Germany lost the territory to Poland and Russia after World War II.