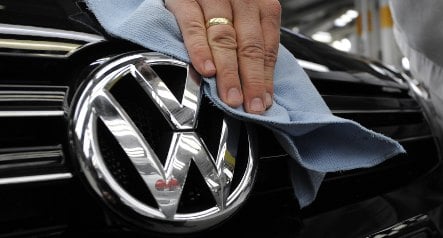 “We have filed two requests,” one for the financial services division itself and another for the Volkswagen bank that is a sub-unit of the division, a VW spokesman told AFP.

He declined to give the amount requested and the date the request was made. “It is a question of obtaining public guarantees. It is not a request for recapitalisation,” the spokesman said.

VW had said several weeks ago that is was considering such a move after encountering problems with refinancing for its auto credit operations. The German government’s bank support plan provides a total of €480 billion ($620 billion) in aid, with the vast majority representing guarantees for loans.

Berlin is also ready to inject cash into troubled German banks in exchange for stakes in them, but relatively few banks have applied for the cash. The three largest German auto manufacturers each own their own banks that offer clients financing, either via credits or leasing programmes.

These activities used to make money for the companies but they have been hit hard by the international financial crisis that had made credit conditions more restrictive, in particular between financial institutions.

The German group BMW has also said it might apply for state aid, and “we are still examining” that possibility, a spokesman told AFP on Tuesday. At rival Daimler, “all options are open,” a spokesman for the financial services unit that oversees Mercedes-benz Bank said.

“We do not currently expect to appeal for public funds,” but the company did not want to suffer from a competitive disadvantage, he added.

If VW obtained state guarantees, its refinancing costs would be lower than those obtained in the market, the spokesman explained.

For now however, “the group’s liquidities are sufficient,” and Daimler did not need outside refinancing, he added.

Automakers have become early victims of the global economic slump, and the chief executive of Italian group Fiat, Sergio Marchionne, predicted on Monday that only six would survive worldwide.

“By the time we finish with this in the next 24 months, as far as mass-producers are concerned, we’re going to end up with one American house, one German of size, one French-Japanese, maybe with an extension in the US, one in Japan, one in China and one potential European player,” Marchionne told the Automotive News Europe.

“The only way for companies to survive is if they make more than 5.5 million cars per year,” he added.

The publication reported that Metzler Bank auto analyst Jürgen Pieper expected VW, Renault-Nissan and Daimler to be among the survivors, but that PSA Peugeot-Citroen, BMW and Fiat would be vulnerable if the downturn worsened.

Marchionne was quoted as saying: “This business is going to be completely different. It cannot continue as it did in the past. Independence in this business is no longer sustainable.”

Audi, the high-end line owned by VW, “has been doing better than Mercedes and BMW over the last few years because it benefits from being owned by VW,” Pieper said.

This was also a factor behind Porsche’s decision to buy VW, the report said.