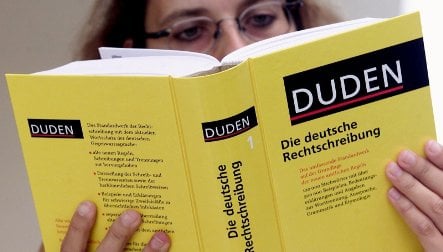 Against the wishes of the party’s leaders, CDU delegates said they wanted the phrase “The language of the Federal Republic of Germany is German,” added to the country’s constitution.

The party’s Secretary General Ronald Pofalla said that a corresponding resolution should be delayed and discussed later with other constitutional amendments. But Saarland state premier Peter Müller said the party needs to focus on what “the nation stands for,” adding that along with the nation’s flag the German language is paramount.

Party delegates ultimately voted for the motion that if ever passed by parliament could change Article 22 of the constitution, which already states that Berlin is Germany’s capital, and the flag is black, red and gold.

The vote to anchor the language wording in the constitution, however, was seen in some quarters as unnecessary patriotic chest-thumping by the conservatives.

“To be honest, this kind of thing is not necessary, and I don’t know what kind of signal they’re trying to send,” spokesperson for anti-discrimination organisation Aktion Courage Gerd Pflaumer told The Local of the decision on Tuesday.

“Of course the German language is important for foreigners who live here but there are already programs in place to help with learning the language.”