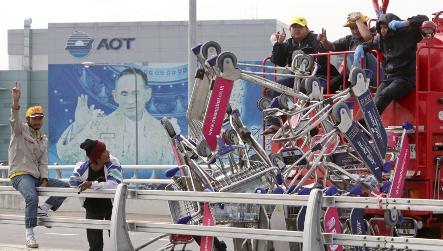 Protestors block the road to the airport over the weekend. Photo: DPA

Some 217 tourists who had booked trips through Thomas Cook, Neckermann Reisen, and Last Minute missed their return flights because of the protests, but were flown out of other nearby airports, the agency said.

Many travel agencies have cancelled trips until this coming Friday as Thai activists continue to block the airport to gain attention for their opposition to the current government. But when possible, tourists from Germany will be rerouted on alternative connections such as Phuket, a spokesperson for Meier’s Weltreisen, a Frankfurt travel agency said.