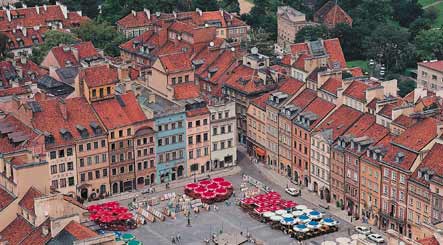 For those itching to get out of Berlin for a quick trip to Germany’s nearest eastern neighbour, the Berlin-Warsaw express train departs daily from the German capital on a five-hour journey to the heart of the former Eastern-Bloc country.

The city of Frankfurt an der Oder marks the last German outpost before the train reaches the dense pine forests of Poland. From here passengers can see a landscape dotted with wooden hunting posts and weatherworn stone cottages. A closer look also reveals an isolated trucking road where prostitutes and crucifixes stand side by side flickering in and out of view from the forest.

After arriving at the Warsaw central station, passengers can stock up on zloty, Poland’s national currency, amid an assortment of fast food joints, before stepping outside into a city of distinct architectural differences and healing wounds.

The fading imprint of a stormy German-Polish past, epitomized by the brutal Nazi occupation during World War II, continues to haunt Warsaw. The Nazis invaded the city in September 1939, and it lay in ruins by the time Soviet tanks rolled in to liberate the city in January 1945.

The remnants of Nazi occupation still leave a bad taste in the mouths of most Poles, who are quick to tell tourists of how the Germans bombed and destroyed their city. A photographic exhibition depicting the extent of the damage lines the main avenue leading to one of the city’s main attractions, the Royal Castle. Images of Warsaw as a wasteland are juxtaposed on images of the reconstructed city, which took decades to repair.

The Soviets began to rebuild the historic city centre of Warsaw after the war’s end, but reconstruction was finally completed in 1962, and not without the help of stolen German bricks. Short on building materials, the Soviets devised a plan to rebuild Warsaw using bricks from buildings in the former German territory of Prussia that became part of Poland after the Potsdam conference.

Wroclaw, called Breslau in German, had been home to many ethnic Germans who fled after the war. The city lost more than a million bricks per day during the height of the pilfering as the communists dismantled historical buildings.

It took nearly two decades to totally rebuild the old town of Warsaw to its former beauty, and main attractions like the Royal Castle, nestled at the edge of the small Old Town, have the aura of authenticity, earning it a UNESCO’s World Heritage listing in 1980.

The original Royal Castle was built in the 14th Century and was destroyed twice, first during a war with Sweden in the 1600’s and later by Nazi Germany. The refurbished royal rooms are filled with glistening chandeliers and treasures from Imperial Poland. In the throne room, guests behold the country’s most precious jewels – a set of 50 diamond eagles, which are Poland’s national emblem. But the birds, like the bricks that rebuilt the city, are fake. The Nazis stole the real treasures during the occupation, and only one of the original eagles has ever been recovered, returned by an expatriate family living in the United States.

The Old Town atmosphere is in direct contrast to the post-war communist buildings, as well as glistening post-communist buildings in other parts of the city. Poland’s tallest building, the Palace of Culture and Science, was built by Joseph Stalin in 1952 as a gift to the Polish people. It towers 231 metres into the sky and looks like a building out of Batman’s Gotham city. The notorious example of Socialist Realist architecture took its inspiration from the Empire State building in New York, and its name – before destalinization – after the communist leader.

But communist rule was overthrown in 1989, and now the bright neon signs of numerous giant multinational companies beam from high-rise office blocks as capitalism closes in on aging communist monuments.

Ten years ago guidebooks were packed with hot tips on where to spend a seedy night in the Polish capital. But change is palpable as the nation, accepted into the European Union in 2004, works to improve its reputation and turns over a squeaky clean leaf.

Visitors can board a city tram for an affordable tour of the city’s more modern sections, as well as a good dose of Soviet-built architecture.

Flower stands now have been established where brothels once stood and elderly Polish women sit with their bouquets of fresh or dried flowers for sale. The colourful stalls, set amidst the concrete high-rise apartment blocks, are as popular as the Lodi ice cream stores in the Old Town. Take a dried bunch of Polish wild flowers back to Berlin as a sweet-smelling reminder of a city blooming in the face of its troubled past.