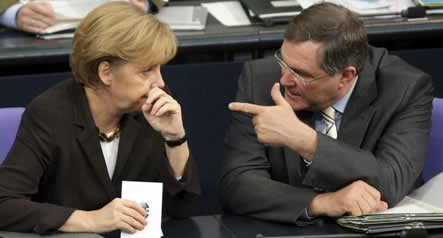 The two-day Christian Democratic Union (CDU) meeting takes place in the southwestern city of Stuttgart amid differences over Merkel’s handling of the downturn in Europe’s biggest economy. But political analysts expect her to overcome the criticism and maintain her popularity with the public, which has remained steady since she became chancellor at the end of 2005.

Merkel leads her Social Democrat rival Frank-Walter Steinmeier, the foreign minister in her coalition government, by more than 20 points in the opinion polls ahead of the September general election.

Merkel’s popularity has largely been due to the fact that “she doesn’t act on the basis of an ideology,” said Gerd Langguth, who has written a biography of Merkel. “She’s a pragmatist.”

Gerd Mielke, a political scientist at Mainz University, said this characteristic was “both her strength and her weakness.”

“She has never followed a straight line for a long time” and has “always compromised”, he said.

That flexible approach has drawn criticism in recent weeks from her own party and its Bavarian allies the Christian Social Union and the pro-business Free Democratic Party, a potential coalition partner, has also been sceptical.

Economic liberals within the CDU, who remain close to big business, want Merkel to announce more ambitious measures to stimulate the economy such as tax cuts and reducing social welfare costs. The influential news weekly Der Spiegel is running a cover story in its issue to hit newsstands Monday entitled “Angela Mutlos (The Faint-Hearted): The Chancellor’s Dangerous Dithering in the Economic Crisis.”

Merkel has rejected calls to take more decisive action now, arguing that budgetary spending has already been agreed. She told Sunday newspaper Frankfurter Allgemeine Sonntagszeitung that she will push for fiscal reform only after her possible re-election.

“The quarrel over taxes remains within political and economic circles and does not weigh heavily on public opinion,” said Professor Hans Herbert von Arnim from the German Research Institute for Public Administration in Speyer.

Merkel gives the impression that she has tackled the economic crisis by adopting in October a €480-billion ($625-billion) loan guarantee package to save banks, he added.

The CDU “may present itself as being relatively unified at the congress but that does not mean they will be no dissatisfaction behind the scenes,” Langguth said. It is not in the party’s interest to undermine Merkel while it is so far ahead of the Social Democrats in the polls and there is no candidate to replace her, he added.

Merkel’s popularity has served to reduce the influence of party heavyweights, or “barons,” none of whom are in a position to defy her. Mielke said Merkel would strike a diplomatic tone during the congress and studiously avoid controversy.

“The chancellor will avoid leaving herself open to criticism by not openly coming out for or against the policies which divide her party,” Mielke, a Mainz University professor, said.

“Her tactic will be above all not to provoke any fights across party lines. She will certainly try to buy herself more time,” he added. “Since 2005, her style of leadership has been more presidential, staying well out of the fray.”