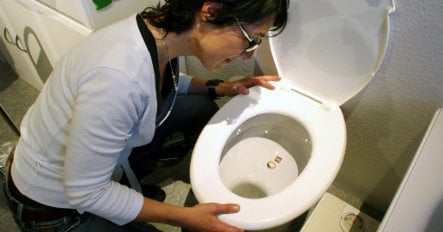 One of the many uses of the dreaded platform. Photo: DPA

The German platform toilet might seem like too obvious a target for a column like this. The odious device is to expat conversation what airplane food is to comedy routines – a well-worn subject usually only revisited by the desperate.

Several years ago, a collection of 17 global toilet associations declared November 19 World Toilet Day – trust me, I’m not clever enough to make this up. Which makes one wonder how to celebrate this grand porcelain holiday. Do the same thing we do every day, I suppose.

Or, discuss the German platform toilet.

To most newcomers to this fine country, the contraption is an enigma. Who would want a shelf, just inches from your backside, that collects your business while allowing you to revel in your own stench? Not even a mercy flush is much help with this thing. And, to make matters worse, it’s almost impossible to get rid of what you want to get rid of without the manual assistance of a toilet brush.

Germans, perhaps tired of having to defend this terrible device to perplexed outsiders, usually just shrug if you bring it up.

It wasn’t until I’d lived here for several years that I finally found one who I believed would give me a straight answer. In a newsroom of mixed nationalities, we were blessed with a German colleague of questionably fervent patriotism (let’s not use the adjective “brown” in this context, okay?) with an amazing knowledge and love of Teutonic culture. I would never have managed to squeeze out a question about the platform on my own but emboldened by my other English-tongued colleagues, I let it fly.

You can’t fight it. As a foreigner in Germany, you just have to live with the platform toilet. I’m fine dealing with this country’s often treacherous bureaucracy, Bayern Munich dominating the Bundesliga and the omnipresent pop-culture clown Dieter Bohlen. But I’m never inspecting any of my sausages.

Still, I’m a little surprised 21st-century Germans still rely on this apparatus to dowse their health.

I’m actually convinced the thing has become yet another tool in the quest to emasculate German men. I’m talking about those ridiculous signs demanding men sit while peeing. I dogmatically ignore them even though I understand why German women think it’s imperative – launching a stream onto the perilous platform from a metre away causes the kind of backsplash reminiscent of really good, um, log rides at an amusement park.

This all could be avoided with a proper toilet with some water down at the bottom. Why aren’t German men fighting against platform toilets so we can be rid of peeing stickmen with red Verboten lines crossing them out?

We renovated our apartment several years ago and at the time I found myself standing in our small, unfinished guest bath with three large construction workers. When the plumber suggested he install a run-of-the-mill toilet, I replied: “Not if it has a platform.” At that point, the three burly men looked at me as if I had no idea how to truly void my bowels.

I refused to budge and the plumber’s wife, who runs an upscale bathroom shop, called that evening. “But Mr. Portnoy, you have small children. It will be really useful.” Tired of talking crap, I told her I wasn’t planning on looking at any pint-sized sausages either. I gave her a model number for what I considered to be a normal Klo and my bank details.

At home, at least, I am now platform-free.

The good people at the World Toilet Organization (again, I’m not making this up) seem to understand my suffering. Just take a look Toilet Day’s theme this year: “We Deserve Better.”

Perhaps I should donate to their cause.

OFFBEAT
It’s legal to trim your neighbour’s tree (even if he doesn’t want you to), Germany’s highest court rules