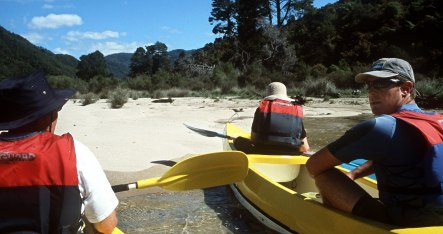 A file photo of kayakers in New Zealand. Photo: DPA

“I had such a big will to live,” Jahn told the Wellington daily Dominion Post on Wednesday. “I kept telling myself that I want to survive, I am still young,” she added.

The 20-year-old went on a paddling adventure on the north island’s Whanganui River last Friday morning with fellow British traveller Jack Marsden-Mayer. By noon the trip had turned into a nightmare when Jahn’s kayak hit a tree trunk in rapids, flipped over and got trapped.

Marsden-Mayer was unable to free her, so he gave her a small plastic barrel to keep her afloat and paddled 30 kilometres down the isolated river to a hiker’s hut where he could radio the police while Jahn fought to stay alive in the New Zealand wilderness.

The Englishman said leaving the German, who he had met only that morning as they set out on their trip, was awful. “I had to deal with knowing that I didn’t have enough strength to get her out, but I had no idea if I’d made the right decision,” he told the paper.

Jahn owes her life to Marsden-Mayer but also to three local farmers who rescued her with a motor boat. Hypothermic and slipping in and out of consciousness, Jahn was flown to a hospital by helicopter.

“I had so many angels and so many heroes and I’m so glad to be alive,” she said after being released from hospital and meeting Marsden-Mayer again for the first time after the ill-fated adventure trip. “He’s my hero,” Jahn told the Dominion Post. “I’m so grateful. I had so much luck – that the water was not cold and never got higher. And that Jack was so fast with his paddling.”

One of her rescuers, farmer Richard Steele, is convinced she must have had iron determination to survive alone deep in the wilderness. He also said Marsden-Mayer’s paddle down the river to get help – which he made in half the usual time of five hours – was simply “awesome.”