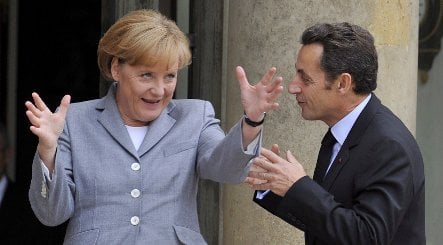 File photo of Merkel and Sarkozy in France on October 12. Photo: DPA

The main focus of the meeting in Washington of the world’s 20 leading economic powers on Saturday is discussing a root-and-branch overhaul of the rules governing the global financial system to shore up confidence.

Despite initial differences, both France and Germany were quick to blame the crisis on a lack of proper regulation and what they call unrestrained “Anglo-Saxon” excesses by the gung-ho investment bankers of Wall Street and London’s Square Mile.

During its presidency of the Group of Eight industrialised nations and the European Union in 2007 Germany advocated greater transparency in international finance, but Berlin says it was thwarted by US and British resistance.

Both Sarkozy and Merkel will be united in Washington in pressing for greater transparency in global finance and a beefed-up role for the International Monetary Fund.

“I think that Germany and France have similar positions when it comes to regulation,” said Katharina Gnath from the German Council on Foreign Relations (DGAP).

“During its EU and G8 presidencies Germany always made proposals about regulation. At the time it was Britain that was more of the problem within the EU, but within continental Europe there was more or less consensus,” Gnath told AFP.

But Franco-German harmony had been notably absent in other areas.

The two countries, which like to see themselves as being the core of the European Union, were at loggerheads after the crisis exploded in September on how to come to the rescue of the continent’s banks and its slowing economy.

French Economy Minister Christine Lagarde, for example, got short shrift from Berlin when she suggested a rescue mechanism – reportedly armed with €300 billion ($375 billion) – to stop the collapse of eurozone banks.

And Sarkozy’s proposals for an “economic government” for the 15-nation eurozone and his October 23 announcement of a French sovereign wealth fund to protect firms from the economic downturn also created irritation in Germany.

For Berlin, the idea of a sovereign wealth fund goes against the free market rules of the European Union, any talk of ‘economic government’ smacks of Gallic micro-management and it is loath – as the biggest contributor to the EU budget – to pay for others’ mistakes.

“In Germany when you hear the words ‘economic government’… alarm bells sound,” Gnath from the DGAP said.

Berlin prefers its economic stimulus measures to be implemented at the national level, albeit when they are closely coordinated with other EU members.

At a meeting of European Union leaders in Brussels on November 7 to prepare a common position for the Washington summit it was all smiles and a statement from Berlin talked about Europe speaking with “one voice” to press for greater transparency for financial products and for IMF reform.

But for some observers the barely disguised spat throughout the crisis between Berlin and Paris has weakened the European Union’s position going into the G20 get-together.

“We could have promoted a European model towards the other countries,” one German source with knowledge of Europe’s inner workings told AFP, saying that the “door had been closed much too quickly.”

“Talking with one voice is never particularly easy for the Europeans,” Gnath said. “But they will try.”