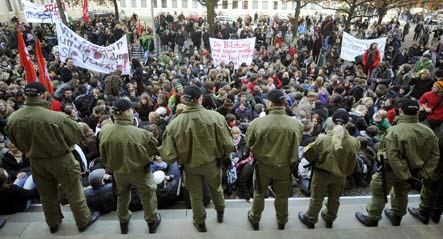 “It is completely unfair. There are not enough teachers and too many children in the classes,” said 13-year-old Kristina Kalinovski. “And we have seven to eight hours of school a day which is much too stressful.”

In most of Germany’s 16 states schoolchildren are streamed aged 10 on the basis of their ability into one of three different kinds of schools – grammar schools, high schools and vocational schools – which critics say is too young.

Chancellor Angela Merkel last month announced an increase in education spending after Germany came in for heavy criticism in a report by the Organisation for Economic Cooperation and Development (OECD).

Employers in Europe’s biggest economy have also complained about a lack of qualified youngsters coming out of schools.