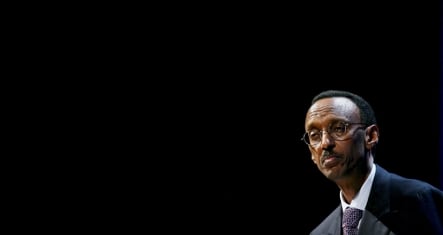 Kagame’s chief of protocol, Rose Kabuye, was arrested on her arrival at Frankfurt airport under a French-issued arrest warrant, Germany’s Foreign Ministry said.

“Germany was bound to arrest her by a European arrest warrant issued by France,” with the goal of extraditing her there, a ministry spokesman said of Kabuye, who is under investigation for a suspected role in the downing of a plane 14 years ago carrying Rwanda’s former Hutu president Juvenal Habyarimana.

“This is a misuse of international jurisdiction,” Mushikiwabo told AFP, adding Kigali would offer an official reaction “soon.”

But Kabuye’s lawyer said she was willing to be transferred to France “as quickly as possible” to speak to French judges, adding such a transfer could take place later Sunday or Monday.

“She is ready to speak to the judges, especially since, to our knowledge, there isn’t much in the dossier,” lawyer Leon-Lef Forster told AFP in Paris.

A former deputy, Kabuye is the first Rwandan to be arrested out of nine warrants issued by French judge Jean-Louis Bruguiere in 2006 against close Kagame aides whom he suspected of being behind Habyarimana’s death.

Bruguiere has accused Kagame of instigating the killing, a charge the Rwandan leader rejects.

Habyarimana’s death sparked Rwanda’s 1994 genocide in which some 800,000 people, mainly minority Tutsis and moderate Hutus, were slaughtered by Hutu extremists over 100 days.

In April, Kabuye sparked controversy by visiting Germany as part of an official delegation headed by Kagame.

At the time, Berlin acknowledged the government was aware of the French arrest warrant, but said German law prevented it from taking action against representatives of foreign states or their delegations it had invited to visit.

This time Kabuye “was at the Frankfurt airport on a private basis,” a diplomat told AFP.

“Rwanda has been made aware on several recent occasions that if Mrs. Kabuye returned to Germany she would be arrested,” the diplomat said.

Lawyer Forster said Kabuye was in Germany to prepare for an upcoming visit by Kagame.

Rwanda and France have long traded and refuted accusations of involvement in the genocide. Kigali broke off ties with Paris following the French arrest warrants.

In August, the Rwandan government issued a 500-page report accusing 13 French politicians of playing a role in the massacres, including then-president Francois Mitterrand, who died in 1996, and former prime minister Edouard Balladur.

The report alleged France was aware of preparations for the genocide, contributed to planning the massacres and actively took part in the killings.

It also named 20 military officials as being responsible for the killings and raised the possibility of Rwandan legal action against them.

Paris has rejected the allegations as “unacceptable,” and last Tuesday, 10 of the French officers filed suit against Kigali for slander.