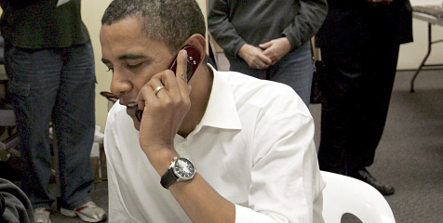 These include the Iran’s disputed nuclear programme, the “stabilisation” of Afghanistan, climate change and the financial crisis, a spokesman for Merkel said in a statement following the Thursday evening phone call.

Merkel also congratulated Obama on his election victory and Obama thanked the chancellor for the warm welcome he received in Berlin when he gave a speech to a cheering crowd of 200,000 people on July 24, the statement said.

Once Obama gets down to business he is expected to press Berlin to step up its unpopular troop deployment in Afghanistan by sending more soldiers to the volatile south of the country.

“Our solidarity could be expensive under Obama,” Germany’s mass circulation daily Bild said this week.

Obama also returned calls on Thursday to the leaders of eight other US allies including Britain, France, Japan, Australia and Israel to express thanks for their messages of congratulation, an aide said.