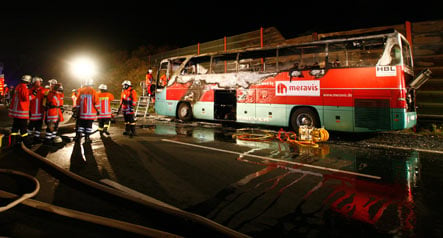 Only around 10 of the around 30 passengers – thought to be pensioners – on the bus were able to escape after it burst into flames on the A2 autobahn between Garbsen and Hannover-Herrenhausen.

Police reported the driver was able to pull the bus onto the shoulder of the motorway after the vehicle caught fire, but the flames spread too quickly for everyone to flee.

Apparently several walking aids were retrieved from the bus, making it likely that several of the passengers were elderly and not highly mobile.

Police said that preliminary indications were that it was not a traffic accident, but it was unclear whether a technical fault or if actions by a passenger were to blame.

The bus started its journey in the industrial Ruhr Valley area in western Germany and was heading in the direction of the capital Berlin in the northeast.

“I am deeply shaken by the dreadful fate of the victims of the fire,” Transport Minister Wolfgang Tiefensee said. “My sympathies go out to their loved ones.”

He added that there had to be a “close” examination into what caused the accident. If initial reports were correct that only a few passengers were able to escape the bus it would have to be investigated whether safety guidelines were adhered to and whether regulations should be strengthened, he said.

It was Germany’s worst coach accident for 16 years. In 1992, 21 people were killed and 35 injured in a crash in the Black Forest region of southwestern Germany.

In June 2007, 13 people were killed when a truck ploughed into a coach at full speed, sending it hurtling down an embankment before it landed on its roof off a motorway outside the central city of Halle.