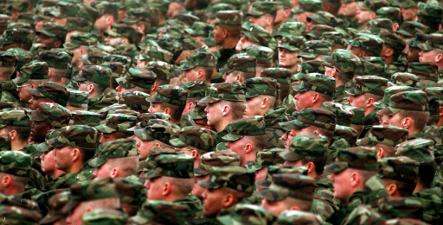 A file photo of a US Army formation at a base in Germany. Photo: DPA

Germany is home to some 56,000 American military service members, second only to the number of troops stationed in Iraq. Civilians might imagine that soldiers, with their fates subject to Washington policymakers amid two ongoing wars, would be particularly keen to follow this year’s historic election. But officers across Germany told The Local that military bases in the country have no official plans for November 4.

“I’m sure a lot of people will follow the results individually,” spokesman Richard Spiegel told The Local from US Army Europe headquarters in Heidelberg. “But there are restrictions against official political events.”

The majority of the 42,000 US Army troops in Europe reside at military bases in Grafenwöhr, Baumholder, Wiesbaden, Kaiserslautern and Stuttgart. Grafenwöhr is the largest army installation in the country, spokesman Eric Bloom said, but there won’t be any public events for soldiers to follow election night results. “We don’t even have a bar on base anyway,” he added.

Retired 1st Armored Division Army Master Sergeant Dave Melancon, a Heidelberg-based journalist for the US Army Europe’s media service, told The Local that AFN has featured frequent commercials about the station’s election coverage in the last few weeks. “We homeschool my son and he’s interested in the election, so we’ll watch as a family as late as we can stand it,” he said, adding that he doesn’t know of any election parties or big events in honour of the occasion.

“Because we’re soldiers and government employees we keep our cards close to our chests,” Melancon said, stressing that he was expressing his opinion as a private person and not as a soldier. “Part of that is because it’s the law, and part of it is because we all have to work together and it really doesn’t matter in the end.”

While the military is careful to keep politics out of its operations, it provides ample resources for soldiers to exercise their right to a personal vote, US Air Force spokesperson Aaron Schoenfeld told The Local from Ramstein Air Base.

“We have voting officers to assist soldiers with voter registration, ballots and other information,” he said. The US Army offers their soldiers the same service.

As for which party soldiers are likely to vote for this election, it’s all quiet on the voting front. Military spokespeople refused to address party bias, which some might assume would favour Vietnam veteran John McCain over Barack Obama. But just like the rest of the American electorate, US soliders can’t be pigeonholed into political preferences.

“There may be some brighter faces tomorrow, but that’s all,” Melancon said.