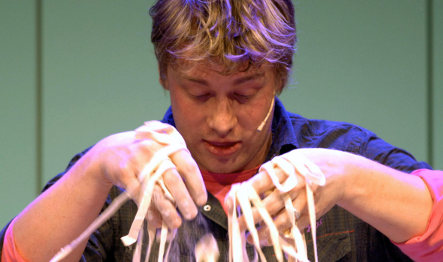 According to an official statement, the “Jamie Oliver Dinner Show”, which had been set to take place on November 13, has been postponed until 2009. It cited problems with the huge tent where it was due to take place.

But Bild said that the real reason was that demand for tickets – which cost between €89 and €129 ($113 and $164) each – had been weak. The mass circulation daily did not say where it got the information.

A spokesman for the public relations firm representing Oliver in Germany, Swen Wudtke, denied the claims, telling AFP that around 7,000 tickets had already been sold.

The extravaganza, with live music and acrobats as well as a four-course meal and “lots of English humour,” had been due to run in Hamburg every day except for Mondays until May.

The show, which was set to seat 500, will now try its luck in Frankfurt on November 20, when Oliver will be there in person, Wudtke said. Oliver would not been present for the Hamburg premiere, instead appearing via video.

Oliver, 33, is highly popular in Western Europe’s most populous country. His books have been translated into German and his shows are featured on television. He was due on Saturday to appear on Germany’s most popular TV show “Wetten, dass…?”