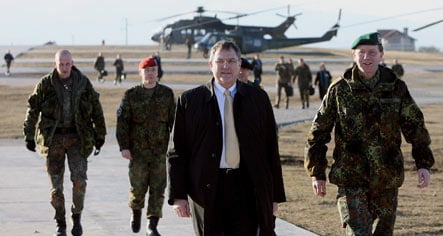 File photo of Jung in Bosnia this February. Photo: DPA

“There is a link between the OHR (Office of the High Representative) and EUFOR,” Jung told reporters of the EU force late on Tuesday.

“One cannot say that the task of EUFOR is achieved until the one of OHR is completed,” he said after meeting Bosnia’s tripartite presidency. Earlier this month EU defence ministers backed a plan to phase out the bloc’s peacekeeping operation in Bosnia but set no date for doing so. EUFOR currently has 2,100 troops deployed here.

The post was due to be phased out in 2007 and replaced with an EU representative. However, the mandate was extended for an unspecified period because of political instability and the failure of local politicians to pass reforms required by Brussels.

Nebojsa Radmanovic, the Serb representative in Bosnia’s presidency, said after meeting Jung that he hoped “EUFOR remains for a while in Bosnia-Hercegovina.”