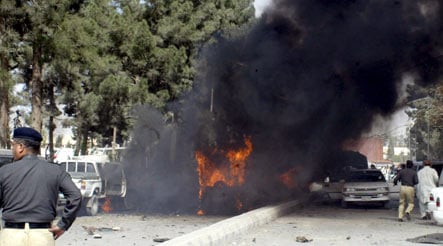 “We want to support Pakistan not only in fair weather but also in stormy weather,” he told a joint news conference with his Pakistani counterpart Shah Mehmood Qureshi in the capital Islamabad.

Qureshi said Pakistan was looking for strengthened trade ties with Germanyand its help in accessing European markets for exports, particularly in textiles, stressing that it wanted to be self-sufficient.

“What we are looking forward to is not aid but trade,” he told reporters.

Pakistan is facing up to a worsening security situation in its US-backed fight against Al-Qaeda and the Taliban and needs up to $4.5 billion (€3.5 billion) to deal with a balance of payments crisis.

On security, Steinmeier said further talks were needed to help Pakistan tackle extremism in its lawless tribal areas and the porous border region with neighbouring Afghanistan that insurgents cross to attack NATO forces.

Berlin would do all it could to assist and welcomed the ongoing talks between Pakistan and Afghan officials and tribal leaders to find ways to end mounting violence, he added.

Some 3,500 German troops are serving as part of the UN-sanctioned, NATO-led international force in Afghanistan and Berlin is planning to send 1,000 more, despite their presence there being unpopular back home.

In a newspaper interview published Tuesday, Steinmeier said his country wanted to contribute to strengthening the rule of law, human rights and civil society in Pakistan in the long-term.

To do so could help reduce the threat from extremism, he added.

“You will not stop Al-Qaeda by drilling a well but you might help reduce militant opposition if you provide job prospects to the young and uneducated in the border region,” he said.

Steinmeier is due to meet Pakistani President Asif Ali Zardari before visiting Saudi Arabia and the United Arab Emirates.