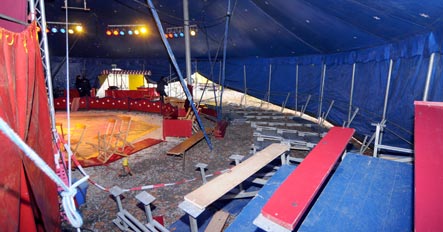 More than 100 adults and children were on the stand inside a circus tent at Velbert on Saturday when it collapsed for unknown reasons. Eleven of those injured had been hospitalised, according to police.

Spectators fell some two metres (seven feet) and suffered fractures, cuts and bruises, police said. None of the injuries were life threatening.

The collapse occurred just after the performance in front of nearly 300 people began. A woman at the top of the stand fell into the tent wall.

The director of the Lollipop circus Robby Ortmann told the Cologne newspaper Express: “Spectators wanted to help her and rushed to her side. The sudden shift of weight on the stand must have caused the accident.”

The stand collapsed like in a domino effect as adults and children fell on top of each other. One girl, who had been waiting for her cue in the wings, said “All I heard were cries of pain and for help.”

Students at the middle school in Velbert had been rehearsing for their performance for a week beforehand, and were excited to have their families attend.

Local officials inspected the tent which the school rented for the performance beforehand, deeming it safe. Police confiscated the tent.

Ortmann, who said he was shocked at the accident, said he had been touring with circuses for 16 years without a single incident.