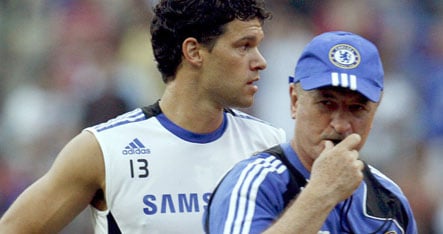 The London club’s coach Luiz Felipe Scolari said that with Ballack still recovering from surgery on his feet, he will stay in England to continue his fight for fitness.

“Ballack plays for Chelsea. If Löw wants to talk to Ballack I invite the coach to come here and stay with us for one or two days and talk to him,” said Scolari.

“But it’s impossible for Ballack to travel now. He is in recovery and is with the doctors. It is not good for Ballack or the Germans.”

“I hope it will not come to a measure which none of us want,” the president of the German football federation DFB, Theo Zwanziger, told TV station Premiere on Friday, alluding to a possible exclusion of Ballack from the national side.

Löw wants to meet Ballack after the Germany skipper claimed the coach did not show enough respect and loyalty to his senior players.

“The situation is very simple. Michael must apologise for his comments on the coach and the players,” Klinsmann said.

Löw had demanded that Ballack return to Germany to explain his outburst, with both men speaking to each other on the phone Thursday evening.

“What will become of Michael is ‘Jogi’s’ business. He is the boss, he decides for himself,” said Klinsmann, who took Germany to the World Cup semi-finals in 2006.

The incident began earlier in the week after Ballack told the daily Frankfurter Allgemeine Zeitung that: “Experienced national players deserve at least some respect and loyalty.”