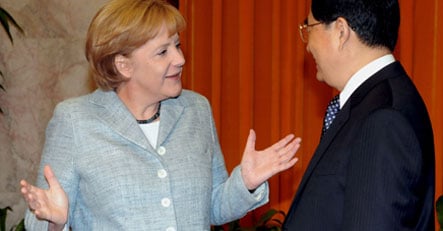 “At the present time, the overall development of Chinese-German relations is good and the two sides are maintaining close high-level contact,” state-run CCTV quoted Hu as telling Merkel on the sidelines of an international summit. “China considers Germany to be an important cooperation partner.”

Merkel, who is in Beijing for an Asia-Europe summit of more than 40 nations, met Hu at China’s Great Hall of the People for a separate bilateral meeting. Her visit comes as the two sides work to normalise ties after her meeting with exiled Tibetan spiritual leader the Dalai Lama last September angered Beijing and led to a chill between China and Europe’s biggest economy.

China opposes foreign leaders meeting the Dalai Lama, whom they accuse of masterminding riots against Chinese rule in Tibet and neighbouring areas in March – a claim he denies.

Beijing responded by cancelling a number of planned German-Chinese political meetings and joint cultural events. But a behind-the-scenes effort by German Foreign Minister Frank-Walter Steinmeier to repair ties has borne fruit, with China’s Foreign Minister Yang Jiechi declaring in June they were back to normal.