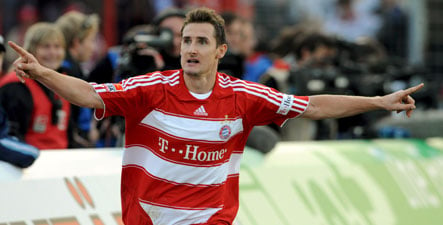 Klose converted Italian defender Massimo Oddo’s cross on 86 minutes to give Jürgen Klinsmann’s side three league points for the first time this month despite another unimpressive performance.

“From our point of view, the result is gratifying – of course it was important to get the three points,” said Klinsmann. “Even if we had to wait a long, long time at least we got the result. We threatened with a goal earlier in the game and it was such a relief that someone finally got the ball over the line.”

Bayern last picked up three points for a Bundesliga game on September 13 when they hammered Cologne 3-0.

Since then the gloss on Klinsmann’s first season in charge has faded badly after Werder Bremen hammered his side 5-2 at home on September 20 and then slumped to a 1-0 defeat at minnows Hanover the following week.

Cries of “Klinsmann out!” were first heard around Munich’s Allianz Arena in their previous league game on October 4 when a poor VfL Bochum side were allowed to score two goals in the last 10 minutes to poach a 3-3 draw.

Despite their first-half domination in Karlsruhe, Bayern could not break down the home defence and lost striker Luca Toni, the league’s top scorer last season, who limped off after 40 minutes to be replaced by Lukas Podolski. And another of Munich top attacking options from last season was substituted on 59 minutes when Klinsmann switched France midfielder Franck Ribery for Germany’s Tim Borowski.

With Karlsruhe unable to create any chances and Bayern unable to convert theirs, it looked like the game was heading towards a 0-0 draw until Klose struck. But Klinsmann’s side will need to do much better against Fiorentina in Tuesday night’s Champions League game in Munich.

Newly promoted side Hoffenheim went top of the league with a flurry of late goals to seal a 5-2 victory at ten-man Hannover which put them level with Hamburg but leading the table on goal difference. But Hamburg have the chance to recapture top spot in the league they host Schalke 04 on Sunday.

Also on Saturday, Bayer Leverkusen moved up one place to third in the league thanks to their 2-0 win at Eintracht Frankfurt.

Striker Patrick Helmes scored his eighth league goal of the season when he converted a penalty after just six minutes and a 61st minute header from Chilean midfielder Arturo Vidal sealed the win.

VfB Stuttgart drop from third to sixth in the table after losing 2-1 in the German capital with Hertha Berlin.

Wolfsburg picked up their first league win for nearly a month as midfielder Zvjezdan Misimovic netted first-half goals as the home side routed Arminia Bielefeld 4-1 to put Felix Magath’s side fifth in the league from ninth. And ten-man Energie Cottbus lost 1-0 at Cologne to stay in the bottom three while Dortmund scored in injury time to seal a 3-3 draw at Werder Bremen.

And on Friday night, Borussia Mönchengladbach, who have former Nuremberg coach Hans Meyer at the helm, picked up their first point in five games when they drew 2-2 at VfL Bochum.