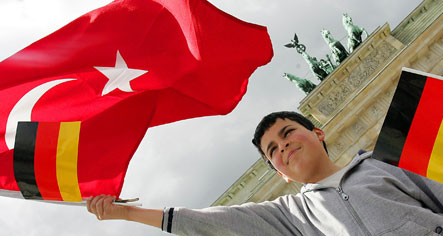 “Naturally, different lifestyles and beliefs sometimes clash. But it’s a core European value to live in mutual respect, as well as have understanding and tolerance for each other’s beliefs,” Merkel wrote in a contribution for a new book presented at the Frankfurt Book Fair.

In a nod to Turkey, which is this year’s partner country at the book fair, “Super Friends” has been published in both Turkish and German by the Hürriyet and Bild newspapers. It surveys the intercultural exchange between the two countries from the perspective of prominent politicians such as Merkel and less prominent performers like provocative Turkish-German rapper Lady Bitch Ray.

Merkel underscored her hope that “Turkey will have a lasting commitment to European values” enabling it to become “not just a geographical bridge, but also a cultural mediator to the countries in the Arab world and Asia.”

An estimated three million people in Germany have Turkish roots. Most came as “guest workers” to West Germany after World War II. At the time, most Germans expected them to leave eventually, but they have since become a crucial part of the country’s social and cultural makeup.

“Without the workers from Turkey and other countries the (post-war) economic miracle wouldn’t have been possible,” Merkel said. “For this they deserve particular thanks and recognition.”