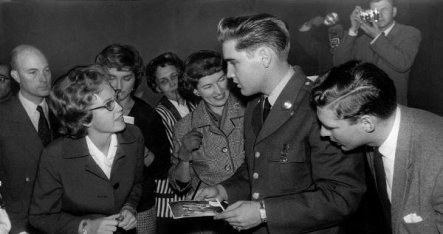 October 2, 1958, Elvis arrives in Friedberg and is met by journalists. Photo:DPA

To commemorate the King of Rock’ n ‘Roll’s passionately anticipated arrival in Bremerhaven on October 1,1958, the city opens its “Elvis in Germany” exhibition on Wednesday, to be followed with concerts and other festivities for the rest of the week.

“He was only here for a short time, but when he stepped of that ship, and gave that first autograph, it was the first time he stepped foot in Europe,” Bremerhaven tourism board spokesperson Nikolaus Menke told The Local on the eve of the festivities. “It was a moment that crossed borders.”

After the iconic photos of the 23-year-old King stepping off the USS General Randall on to the Bremerhaven gangway were snapped, he went on by train to Friedberg in the German state of Hesse, where he served for 17 months. The star wrote songs like “It’s Now or Never” while living in the nearby town of Bad Nauheim, and met his future wife Priscilla when she was just 14-years-old. Both towns have planned to host tours and concerts.

The two years Elvis Presley resided in small-town Germany were full of tabloid headlines such as “Elvis becomes German,” and Menke told The Local that his presence helped build a sense of solidarity between West Germany and the US.

“It was the Cold War, and we needed to strengthen these bonds,” he said.

The Bremerhaven historical exhibition, put together by historians Dr. John Provan and Peter Heigl, will include photos and artifacts. It runs until November 15.