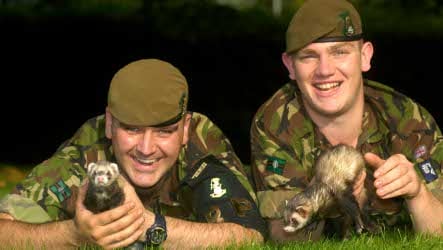 “The morale boost is amazing,” British Army spokesman Captain Laurence Roche told The Local on Thursday. “The soldiers are fiercely proud of these things.”

The two mammalian mascots “Imphal” and “Quebec” recently travelled from England to join the 1st Battalion The Yorkshire Regiment at the German base, which is home to the British Army’s 20th Armoured Brigade. The pair, named after battle honours, were a traditional gift from Yorkshire residents and have been adopted as official pets.

“We’re not exactly sure, but we believe the tradition comes from the First World War when soldiers used ferrets when foraging for food,” Roche said, adding that the wee carnivores were used to hunt rabbits for the soldiers.

But these modern ferrets are purely symbolic and won’t be along to supplement rations in November when the 300 soldiers from the battalion nicknamed “The Yorkshire Warriors” head to southern Iraq.

The ferrets will remain home in a cage just in front of the barracks, where they play a central part of military life, taking part in parades in their own tiny uniforms in regimental colours. When the troops are in formation, the ferrets are even allowed to scamper around the soldier’s boots.

“They have a jacket in Brunswick (Braunschweig) green with a capbadge on the side of it and they have little hats and the regimental leads which are exactly the same as our stable belts. They’re the pride of the Battalion,” Provo Corporal Norman Shay said in an army statement.

The Yorkshire Warriors are the only British battalion to have ferrets, but a handful of units also have animal mascots, including goats, a horse and an Irish Wolfhound, Roche said.